(Austin, TX) — This morning, Governor Perry swore in Anne Cynthia Leon to the Texas Public Safety Commission in the company of her family and Senator Juan "Chuy" Hinojosa who confirmed the appointment.

"My endorsement and the appointment of Cynthia Leon to the Texas Public Safety Commission is an important step for this accomplished woman and for the people of Texas," Senator Juan "Chuy" Hinojosa said. "The Commission oversees the Texas Department of Public Safety and together, they are charged with the important mission of protecting us as we go about our daily lives."

Anne Cynthia Leon retired from a 36-year career with the U.S. Department of Housing and Urban Development. She was appointed to the position of HUD Regional Director, Region VI, by President George W. Bush on December 3, 2001 - she served in that capacity until her retirement.

"There is no doubt that Cynthia has the experience and passion necessary to fulfill her role in the Texas Public Safety Commission," Senator Hinojosa continued. "She also brings a border perspective to the Commission - a deep and personal understanding of the security issues we face on our borders - that will allow her to make well-informed decisions regarding our public safety."

Ms. Leon's career in public service began with her first job as a VISTA volunteer in 1969. Later on, she became the Director of Native American Programs, the Director of Public Housing in the Denver Regional Office and the Director of HUD's San Antonio office until her appointment of Regional Director - where she was responsible for the delivery of HUD programs and services to more than 33 million Americans living in the states of Texas, Oklahoma, Louisiana, Arkansas and New Mexico.

"I am proud to confirm Cynthia Leon in her new capacity, and I am confident she will serve the people of Texas to her best ability. I congratulate her and her family for this great honor," Senator Juan "Chuy" Hinojosa concluded. 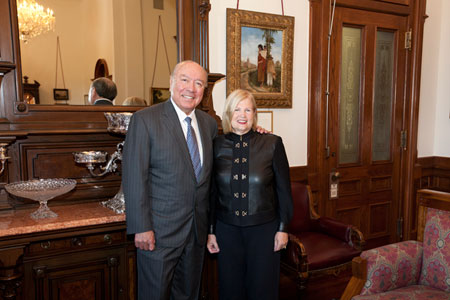